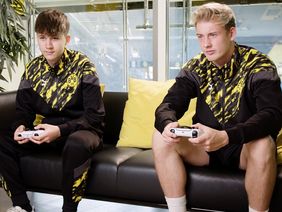 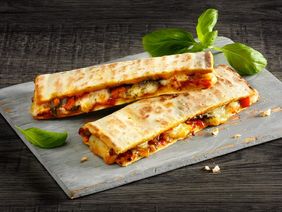 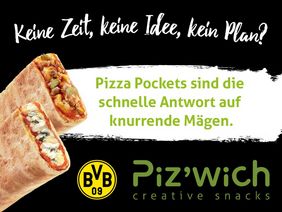 Rietberg, 22 July 2021. The way to a football lover’s heart is indeed through the stomach, at least at Borussia Dortmund and the Frostkrone Food Group. For the next two years, the Rietberg-based group will remain the partner & eFootball supplier of internationally successful Bundesliga club Borussia Dortmund. With a new, entertaining advertising video relating to the Piz’wich Pizza Pockets for quickly satisfying one’s hunger, BVB and the Frostkrone Food Group are launching their continued partnership and are snacking directly into the young, media-savvy target group.

When top league player Julian Brandt and eFootballer Dennis "Denninho" Malcherczyk gamble together, there is little time left for eating. A fact also recognised by BVB team chef Dennis Rother. The two players prefer to grab a quick, delicious Piz`wich Pizza Pocket instead of being elaborately cooked for, as they are “easily ready at half-time”. Even the chef cannot resist in the end and tries out the practical snack, which needs only a few minutes in the oven and is then ready to eat, hot and delicious. For this reason also, the message of the new spot of BVB and the Frostkrone Food Group is “Can’t be bothered? No time? No plan? Pizza Pockets are the quick answer to growling stomachs” and shows with a wink how simple and delicious the Pizza Pockets from Piz’wich are.

The video clip can be seen on Youtube and all social media channels from 22 July.
Link: youtu.be/yl4IeW5nhJw

At the same time, the advertising video shows the connection between traditional football and the eFootball area, in which the Frostkrone Food Group is also a partner.
From the outset, Frostkrone has supported the eFootball activities of BVB as a sponsor and was even involved in the first eFootball bootcamp in October 2020 with crunchy, golden-brown finger food under the brand “Crunchy Homies” as delicious soul food. The relaxed atmosphere has now kept more than 7,000 in front of the screens and has ensured 236,383 live call-ups. Since the first boot camp, the club has continuously increased its follower figures.

As in traditional football, BVB invests here too in a top team that not only plays successfully, but also thrills the fans with constant interactions. Live streams regularly take place via TWITCH.TV. Additionally, clips from past sessions, tips and tactics can be accessed online.

Pizza Pocket – so quick, so delicious, so clever

With the new partnership, the Frostkrone Food Group guarantees itself the delivery rights of the Piz`wich Pizza Pockets as the exclusive pizza snack at the SIGNAL IDUNA PARK. The Pizza Pockets are available as a version for the microwave or the oven and in various varieties, e.g. “salami”, “ham & cheese” and “tomato mozzarella”.

Additionally, a selection of popular finger food variations from Frostkrone will continue to be offered at several kiosks in the stadium as well as in the VIP area. Among other options, attendees at home games can enjoy the new, super-crisp finger food “Crunchy Homies” in the varieties crunchy mozzarella sticks and crunchy chili cheese nuggets.

Frostkrone has been a partner of BVB for four years.

“We look forward to two more successful years together with Borussia Dortmund. With the new agreement, we will appeal in a more targeted manner to our target group at the stadium and at home who enjoy choice and quality in their food without elaborate preparation. All the finger food and snack variations we offer at the stadium or show in eFootball can be purchased at retailers to eat at home,” says Frédéric Dervieux, CEO of the Frostkrone Food Group

The Frostkrone Food Group is characterised by a large variety of finger foods and snacks and sells its products in food retail and in the food service sector. The many-faceted range of products is available worldwide, including in Scandinavia, the Netherlands, France, Spain, Portugal, the United Kingdom, Switzerland, Eastern Europe, Asia and the USA.