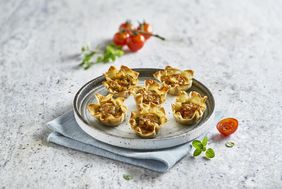 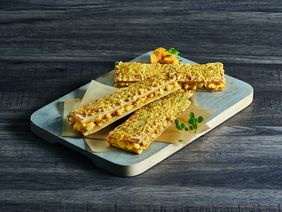 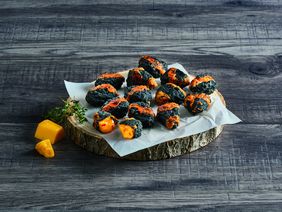 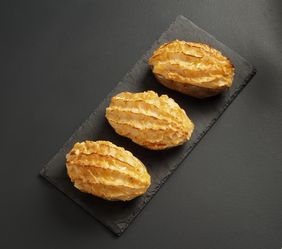 Jerome, November 12, 2019. Rite Stuff Foods Inc. will be showcasing its current range of incredibly diverse products at the Chicago specialist trade fair. From November 18-19, visitors to the PLMA, which is being held at the Donald E. Stephens Convention Center, will be able to find out about everything available in the world of deep-frozen finger food in the North Hall there at Booth No. 2919.

Rite Stuff Foods Inc. has long since made a name for itself in the USA as the leading manufacturer of special potato products. But since the beginning of this year, the company has been part of the Frostkrone Food Group so in future intends to also conquer the market with trendy ideas on finger food and snacks. The retail trade, the world of gastronomy and indeed restaurants can all expect a burgeoning product range and new synergies as a result of this company acquisition.

Part of the Frostkrone Food Group

The Frostkrone Food Group has its headquarters located in the town of Rietberg, Germany. Its companies are specialized in the development, production and marketing of finger food and snack products. Apart from Rite Stuff Foods Inc., the Frostkrone Food Group is comprised of the following companies: the German frostkrone Tiefkühlkost GmbH and Bornholter Käsevertriebs- und Produktions GmbH, both of course located in Germany, and the French companies Varenne Gastronomie and Piz'wich with their headquarters in France.

The extensive and thoroughly international selection of the Group's street food products can be found in the retail trade, in food service outlets and at snack stations throughout Europe, the USA and Asia.

Frédéric Dervieux, CEO of the Frostkrone Group, explains as follows: "When we develop new products, we set ourselves no limits whatsoever - whether it's regarding the raw materials and ingredients or the ideas themselves. In this way we remain open to everything and totally creative."

On their stand at the PLMA, Rite Stuff Foods will present customers from the retail trade and food service branch with an impressive concentrate of diversity taken from the world of street food. These delights range from dainty specialities made of Tunisian-style brick dough, through trendy snack ideas such as delicious potato snacks and gourmet pizza pockets perfect for oven and microwave.

Here are just some examples of the tasty street food variations that visitors can get to know and sample at the show:

Lava Bites - the winner of the Taste Innovation accolade at the anuga, the world's biggest foodstuff exhibition: The fiery Lava Bites are as black as volcanic rock on the outside with a glimmer of glowing lava but on the inside their fiery mix ablaze with creamy Cheddar cheese and red jalapeño chili peppers sets everyone alight.

The Pizza Pocket Breakfast can be savored in several different vegetarian variations: The classic version is of course that bursting with a hearty helping of scrambled egg, spicy, full-flavored Cheddar cheese and gently sautéed potatoes. And then there are the scrumptious combinations such as "Breakfast Veggie Bacon & Egg", "Breakfast Veggie Sausage, Egg & Cheddar" and "Breakfast Egg, Gouda & Potatoes". The Pizza Pockets are available for the microwave and for heating in a conventional oven.

Small flowers are the exquisite little appetizers created out of brick dough baked wafer-thin. For the Vegetables & Mozzarellaversion, creamy mozzarella chimes together with feta cheese and Mediterranean vegetables to create a symphony of flavors.

Potato snacks such as Twice Baked "Triple Cheese": The twice-baked, original Idaho® potatoes are baked to perfection, halved and scooped out before being filled with three kinds of cheese.

John MacArthur, Managing Director of the Frostkrone Food Group USA, is utterly convinced of one thing as he explains here: "At the PLMA in Chicago, Rite Stuff Foods will make a grand entrance as part of a strong and innovational business group that offers its customers impressive products and attractive services. A fact which is certainly interesting for all the customers we have served so far and something that is going to ramp up our appeal for new business contacts."

Buoyed up by a staff of more than 200 employees, Rite Stuff Foods is undoubtedly the leading manufacturer of potato products throughout the USA. The company processes exclusively Idaho® potatoes.

Rite Stuff Foods was founded by Thomas J. Madden in 1989 and has enjoyed steady development, marked expansion and much success particularly during the last few years. Since April the American food producer has been spearheaded by John MacArthur, the Managing Director of Frostkrone Food Group USA.

Rite Stuff Food Inc. offers a steadily growing product range of delicious potato snacks and potato side dishes, which includes twice baked potatoes, potato skins, small breaded wedges, potato boats and potato rollers. In the future at the Jerome location in Idaho, mozzarella sticks, chili cheese nuggets and other kinds of tasty snacks will be coming off the food processing production lines. Products that were previously imported from Europe will now be "homegrown" and supplied to supermarkets and to the food service branch direct from a domestic manufacturing facility.

The company is USDA tested and has SQF (Safe Quality Food) certification.

Frostkrone has its headquarters located in the town of Rietberg, in the federal German state of North Rhine-Westphalia, and is specialized in the production and marketing of deep-frozen finger food and snack products. Since its founding in 1997, the company has established itself as an innovative trendsetter in the deep-frozen, convenience food segment. The year of 2018 saw Piz'wich Europe and Varenne Gastronomie becoming part of the Frostkrone Food Group and in 2019 the US-American business Rite Stuff Foods Inc. swelled the ranks when they joined the Group.

The Frostkrone Food Group stands out in sharp relief because of its incredibly wide variety of finger food and snacks. The Group markets its products in the food retail trade, in the food service industry and also online. The many-faceted range of products is available worldwide in a great deal of countries including those in Scandinavia, the Netherlands, France, Spain, Portugal, Great Britain, Switzerland, in the eastern European countries, Asia and in the USA.