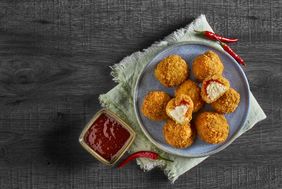 frostkrone is expanding its Crunchy Homies range and adding Paprinos

Rietberg/Germany, 01 March 2021. The crispy delights have upped their game: the Crunchy Homies from frostkrone boast the addition of hot and spicy Paprinos with a cream cheese filling. And the special crispy coating means that the red cherry peppers from South Africa are now simply unimaginably crunchy.

These Paprinos are filled with the creamiest of cream cheese. So when you bite into the crunchy coating, you delve into a sweet and spicy pool of flavours.

Under the umbrella of Crunchy Homies, frostkrone is now bringing together its popular snack range that has graced the shelves of freezer cabinets for years. With the advancement of new technologies and thanks to an improved recipe, the goodies of this range come out of the oven even crispier than ever before.

The following are already up and running as Crunchy Homies:

More details can be found in the flyer.

The Frostkrone Food Group is characterised by a large variety of finger foods and snacks and sells its products in food retail and in the food service sector. The
many-faceted range of products is available worldwide, including in Scandinavia, the Netherlands, France, Spain, Portugal, the United Kingdom, Switzerland, Eastern Europe, Asia and the USA.