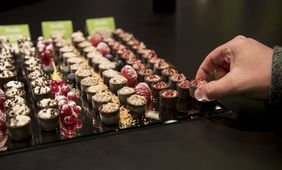 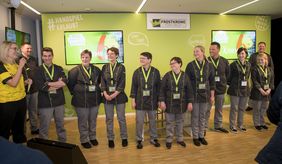 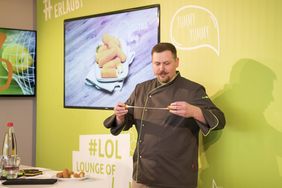 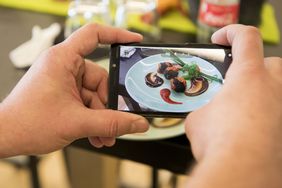 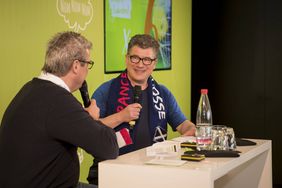 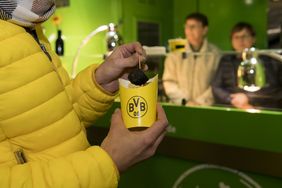 Rietberg, 27 May 2019. "XTREME6 - Lounge of Launches" - the first frostkrone Innovation Day 2019 has amazed the invited guests from business, trade and media. Six brand new and extraordinary finger food and snack products were in the limelight at this event. Moreover, the event provided an opportunity to get to know and experience the new Frostkrone Food Group with its individual companies and brands. For frostkrone as a product partner of the BVB, the one and only location worth considering for this event was: the SIGNAL IDUNA PARK, the largest football stadium in Germany.

The five products were each announced with informative, entertaining film clips, followed by a tasting of the novelties by the guests - on the hoof and hot. Preparation and presentation on site was in the hands of the professionals of the frostkrone team. After all, each detail had to be right. Following the tasting, the particular features of the product, the preparation as well as serving suggestions and placement of products were shown. All newcomer products have been developed based on current food trends.

The presentation was started with Maxxarella, the longest cheese delight that fits between two fingers. Thanks to a new manufacturing process, the mozzarella inside can be stretched tremendously. Our guests also tried it out themselves, and determined in a battle who managed to have the longest cheese stick. The winner was happy about a signed BVB football.

The number 2, the Lava Bites, immediately caught the eye: Black like volcanic rock with a trace of glowing lava, that’s how the bites arrived hot to the table. Just one bite and the creamy cheddar cheese flows out slowly like lava. And the red jalapeños add the hot kick for the palate.

First looked at, then cracked: Crack ‚n‘ Cheese Cubes with their cube shape offer food service and consumer a lot of great creative freedom in serving and decorating. Behind the extremely crunchy coating of a super crispy batter, delicious macaroni in a savoury cheese sauce and crispy bacon are waiting. A snack, even ‘real men’ are eager to snap up.

Who doesn’t get weak now - it’s your own fault! A sentiment also echoed by many guests who simply couldn’t get enough of the APPLE LOVE BALLS. The little balls of indulgence offer a pure palate temptation as well as all the advantages of a modern dessert: whether served as a finger food dessert at parties, hot with ice or as a sweet snack, for example on the plane.

After specialties made by Varenne were offered at the reception, it was now the turn for the new Pizza Pockets from Piz`wich:

Pizza Pocket Breakfast is the answer to all the quick breakfast questions. The pizza pocket is filled with hearty scrambled eggs, spicy English cheddar cheese and finely fried potatoes. Just briefly in the oven and then eaten straight out of hand.

The Pizza Pocket Organic came straight out of the microwave and is totally organic: the crispy baked dough pocket is filled with tenderly melting mozzarella, tomatoes and a spicy pesto sauce.

Thanks to their practical shape and easy preparation, Pizza Pockets are ideal for back off stations, petrol stations and kiosks.

Frostkrone Food Group on the road to success

At the start of the Innovation Day, the managing partner, Frédéric Dervieux, answered the sporty questions of the football icon and BVB veteran Nobby Dickel.

Frédéric Dervieux recalled his early days at frostkrone, talked about development and performance since 2013 - the year he assumed the role of CEO - and dared a positive view of the future: "In recent years, we have become an innovation leader. To do so, we use the potential of our employees, draw inspiration from trends in other industries and refer to the know-how of competent institutes. The Frostkrone Food Group with all its companies and their product diversity presents itself today and in future as one team. We want to have a joint appearance and want to be successful together."

At the Innovation Day 2019, the new Food Group presented itself in all its diversity with its respective product developments. At the same time, they convinced as a well-functioning corporate group, all pulling in the same direction. The individual brands are united under the umbrella brand of Frostkrone Food Group, but each of them remains an independent business.

Get a whiff of BVB air

At the end of the event, the stadium tour of the SIGNAL IDUNA PARK allowed the guests a take a look behind the scenes. The detour to the frostkrone kiosk and the additionally built mobile stands of the finger food & snack expert provided a comprehensive picture of the product range and an opportunity for frostkrone to present itself as BVB product partner. The original stadium snacks - from Rösti sticks, Chili Cheese Nuggets in the yellow and black BVB look to Pizza Pockets in the varieties 3-Cheeses, Chicken Fajita and Burger Style - flew over the counter.

Headquartered in Rietberg, North Rhine-Westphalia, frostkrone is specialised in the manufacture and sale of deep-frozen finger food and snack products. Since its foundation in 1997, the company has established itself as an innovative pacesetter in convenience frozen food. In 2018, the French companies Piz’wich Europe and Varenne Gastronomie became part of the Frostkrone Group. In 2019, the US-American company Rite Stuff Foods Inc. was added.

Frostkrone Food Group is characterised by a wide variety of finger food and snacks and distributes its products in the food retail, food service and online. The varied assortment is available worldwide, including Scandinavia, the Netherlands, France, Spain, Portugal, Great Britain, Switzerland, Eastern Europe, Russia and the USA.