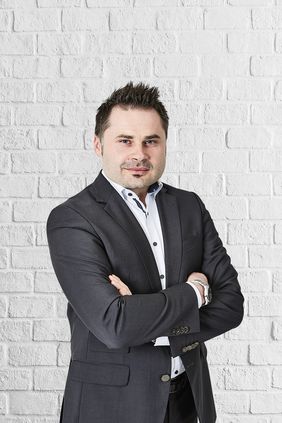 Rietberg, 11 April, 2019. Since March, Roman Wedel is appointed new Managing Director of Frostkrone group. Since mid-2014, the 37-year-old has been responsible for HR, IT, accounting and controlling in the company. In his new role as CFO, he will assist Frédéric Dervieux, managing partner of the company, in order to jointly achieve the growth targets set.

Since 2009, Roman Wedel has been working as a controller at frostkrone. Over the years he continuously assumed more and more responsibility until he became commercial director in 2014. The father of three began his professional career already during his studies at the University of Bielefeld as a controller at Frost & Frisch Convenience GmbH, where he also worked after graduation until he changed to Frostkrone.

"I am looking forward to take on more responsibility in the company in my new role as CFO. In recent years already I have been able to actively participate in the company’s positive development," says Roman Wedel.

Frostkrone has stood for innovation and expertise in the frozen food sector for more than 20 years. This is also shown by the sales figures, which have risen convincingly for years now. The diverse, varied deep-frozen finger food & snack ideas are distributed throughout Europe, including Scandinavia, the Netherlands, Belgium, France, Spain, Portugal, Great Britain, Switzerland, Austria and Eastern Europe. The company from Rietberg also exports to Russia and the USA. Since April 2017, Frostkrone is part of the Munich-based investment company EMERAM Capital Partners GmbH consulting funds ("EMERAM"). Last year, the company acquired Piz'wich and Varenne Gastronomie, both based in France.

Headquartered in Rietberg, North Rhine-Westphalia, the Frostkrone food group is specialised in the manufacture and sale of deep-frozen finger food and snack products.

Since its foundation in 1997, the company has established itself as an innovative pacesetter in convenience frozen foods. In 2018, the French companies Piz'wich and Varenne Gastronomie became part of the Frostkrone Group. In 2019, the US-American company Rite Stuff Food, Inc. was added.

Frostkrone food group is characterised by a wide variety of finger food and snacks and distributes its products in the food retail, food service and online.